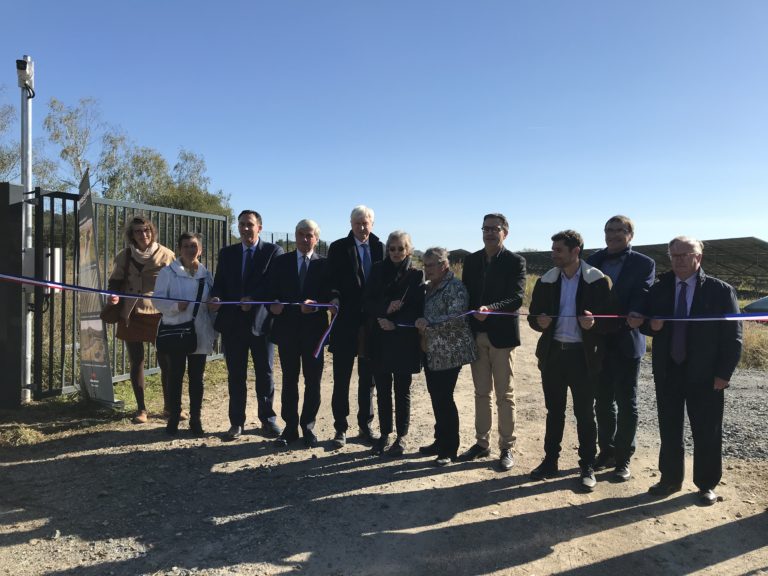 This Thursday, Urbasolar, along with the local authorities for Sud Sarthe & Loir Lucé Bercé and numerous local dignitaries and citizens, inaugurated this solar energy plant.

Located on a former military munitions dump (ETAMAT in Aubigné-Racan) which closed in 2002, the solar energy plant project is part of the rehabilitation of the site which had already undergone explosives decontamination, dismantling of the military installations and ground decontamination between February 2008 and November 2010.

Five years after the army’s equipment facility (ETAMAT) closed, the local authorities signed an agreement with the Ministry of Defense on July 3, 2007 to acquire 59 of the 165 hectares available at this site. At the same time, an economic development agency for Sud-Sarthe (SDESS) was created to manage this site, now renamed Loirécopark.

After having acquired the site from the State, the SDESS (made up of elected representatives from Sud Sarthe & Loir Lucé Bercé) launched the project in order to rehabilitate this polluted and unusable land and engage the region in the energy transition. Today, 19,800 MWh of low-carbon electricity is being produced each year, covering the consumption of 9,000 citizens or 40% of the local population.

Initially intended to cover 40 hectares, the plant’s footprint was reduced to just 24 hectares.

The reason was to protect the site’s biodiversity.

After studies were conducted in collaboration with the SDESS (dissolved in 2018 and its activities taken over by the Sud Sarthe Local Authorities Group together with the regional government and Loir-Lucé-Bercé Local Authorities Group and the State), some exclusion zones were set up around the site. These were designed to preserve the environment and, in particular, to protect the habitat of the Large Blue (Azuré du Serpolet), a protected species of butterfly. Environmental monitoring will be in place throughout the operating lifespan of the plant to ensure that existing habitats are protected but also so that the site can be recolonized by populations of fauna and flora.

Designed, constructed and operated by Urbasolar, the VAAS solar energy plant is a demonstration of all of the group’s technical and environmental know-how.