Dominican Republic: Urbasolar has been commissioned by the government to deliver a 55-MW project! 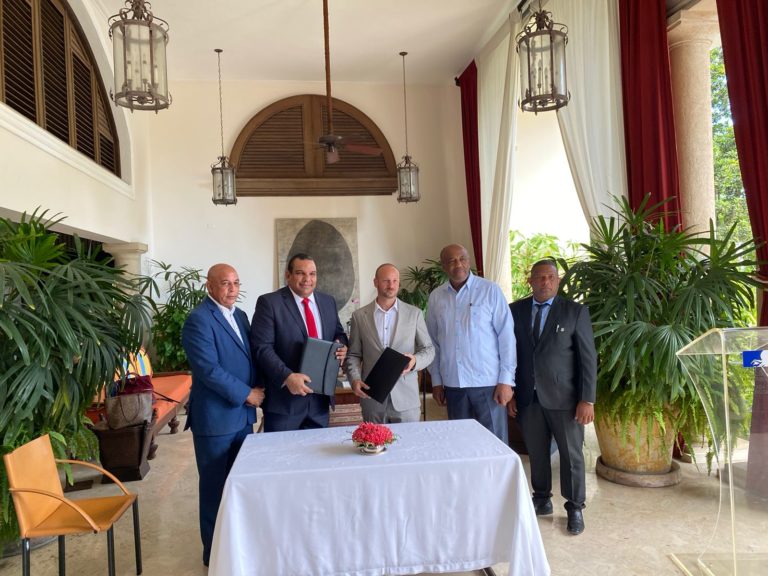 It was at the Résidence de France that French Ambassador Eric Fournier had the honor of receiving representatives from the companies and institutions involved in the signature of this commission.
In the presence of Antonio Almonte, Minister for Energy and Mines, Edward Veras, Executive Director of the National Energy Commission, César Rojas, Mayor of San Antonio de Guerra and Mathieu Buono, Urbasolar’s Development Director for Dominican Republic and Mexico, the signing of this commission marked the culmination of work carried out by the various stakeholders to deploy solar energy infrastructure in the Dominican Republic.

Located in San Antonio de Guerra, less than 1 hour from the capital Santo Domingo, a site covering 100 hectares was acquired by the Urbasolar group (also in charge of developing, constructing and operating the site) to be rehabilitated into a solar energy plant producing no less than 55 MW. Work is set to start in 2023 with the plant’s eventual connection to the local electricity grid via a substation located 5 km from the site belonging to ETED (Empresa de Transmisión Eléctrica Dominicana).

Producing 90 GWh annually and saving 53,000 tonnes of CO2/year, this solar energy plant is proof of the government’s commitment to the island’s energy transition and its intention to move towards a more sustainable energy model.

This project also firmly plants the Urbasolar group in the Dominican Republic and is a reward for the group’s technical expertise and its proven ability to deliver high-output power projects around the world. The group is also planning to develop a second project of the same size at the same site.

Convinced of the benefits of solar energy for both the country’s environment and its economic future, Urbasolar is committed to working in partnership with local stakeholders, companies and institutions in order to develop solar energy infrastructure wherever its expertise can be put to good use and further promote the use of renewable energy.