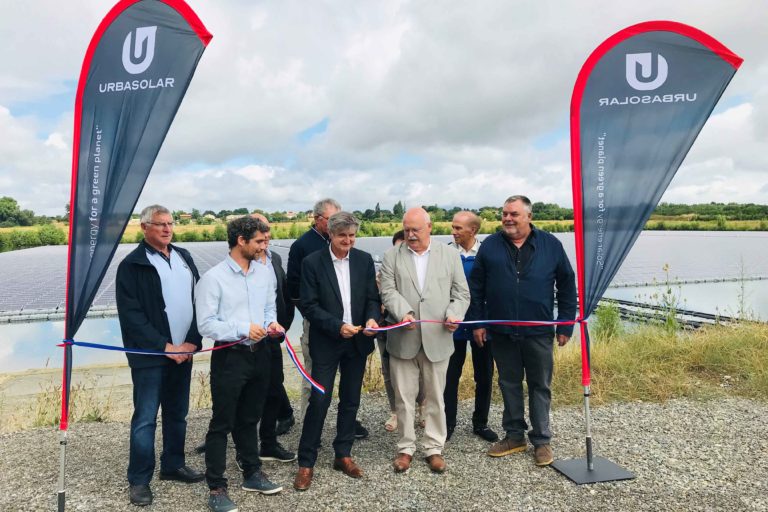 This Friday June 24, the first floating solar energy plant in the Haute Garonne, situated at Peyssies, was inaugurated in the presence of Julien Picart, Director of Development at Urbasolar, along with Daniel Grycza, the Mayor of Peyssies.

Work on the upgrading of this former quarry (now converted to a lake) started in February 2021 – in February 2022, the Peyssies solar energy plant started producing its first kilowatthours of renewable electricity.

Initiated by the Peyssies municipality, this floating project combines environmental issues with a technological challenge. It is proof of the opportunities that exist for solar energy to be used to turn artificial lakes into a source of green energy.

The 14,000 solar modules which make up this structure are connected to each other by floating platforms which together form a single island.  This island will be secured by anchor lines attached to the banks of the lake. This technological challenge was taken up by Urbasolar’s own internal R&D department which thrives on finding bespoke innovative solutions tailored to the peculiarities of each site and which meet the highest quality standards.

Connected to the electricity grid at the start of February 2022, this floating solar energy plant forms part of the region’s energy transition plan, producing 6,250 MWh/year annually, or 10% of the electricity consumption of the Volvestre Regional Authorities Group.

Strong actions which benefit the environment

For Urbasolar, each solar energy project must blend well into its natural surroundings and maintain the existing biodiversity. This commitment to the environment led to the positioning of the studied solar panels to preserve the fauna on the banks of the lake, with a minimum 15-meter gap between them and the floating plant.

In addition to rigorous ecological monitoring of the flora and fauna, Urbasolar (in collaboration with the French scientific agency CNRS) also committed to monitoring aquatic life to ensure that the implemented measures produce the effects expected from the environmental impact study.

This floating solar energy plant reinforces the expert status enjoyed by Urbasolar, as it delivers innovative and high-performance projects, whatever the nature of the site. The launch of 2 other floating projects in the neighboring areas of Carbonne and Salles-sur-Garonne are further proof of the trust placed in the Urbasolar group by local communities acting to advance the energy transition. 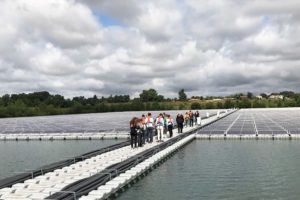