SMITED 79, Urbasolar and Séolis PROD, partners in the construction of the La Loge solar energy plant 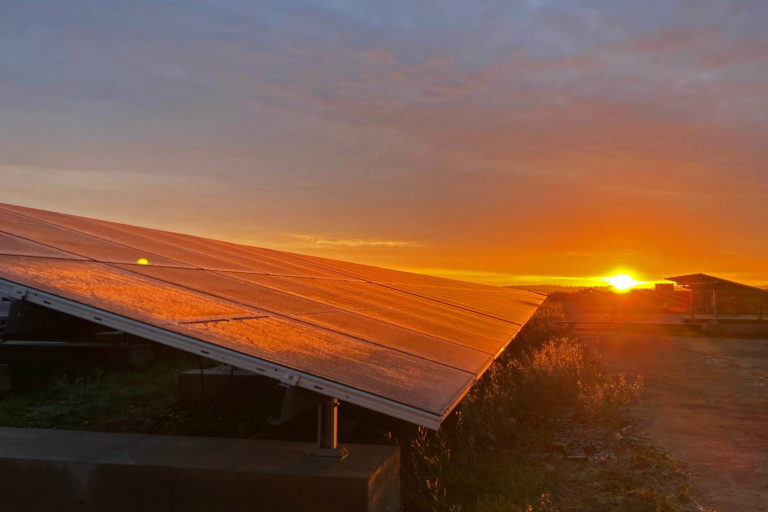 Situated in the municipality of Coulonges-Thouarsais and managed as a partnership between Urbasolar and Séolis PROD, this project for a ground-based solar energy plant is part of an environmental regeneration program for part of the La Loge waste storage site run by the Deux-Sèvres Mixed Waste Treatment and Disposal Group (SMITED 79). The lease agreement, already signed in 2019, was restated before a notary today, Wednesday, March 9, 2022.

Rehabilitation of a waste storage facility

La Loge 1 & 3 are the subject of a rehabilitation program for conversion into a source of renewable energy production with the aim of developing this type of energy. La Loge 1, a former waste storage site which closed in 2007, has been converted into an electricity production facility using biogas generated by the waste materials. In the context of this project, it will house solar panels which will be installed between the existing biogas transport lines. La Loge 3, basically consisting of meadows, will be included in the plant.

To deliver this project, Urbasolar and Séolis PROD have combined their skills to breathe new life into a site whose ground can no longer be used for the storage of waste. Covering an area of 9.5 hectares, this solar energy plant will have an output of 5 MW and produce 5,900 MWh of electricity each year, the equivalent of the electricity consumption of around 2,700 people.

This is the second partnership between Urbasolar and Séolis PROD, following the construction of the TIPER 2&4 solar plant at Thouars. A provisional date for commissioning the plant at La Loge is set for early 2023.

Particular attention has been paid to this solar energy plant to ensure it complies with landscape integration and biodiversity protection measures.

“This project is a new opportunity for Séolis PROD and Urbasolar to combine their respective skills and expertise in the interests of developing renewable energy in our region, in a spirit of sustainable local development. Our organization, SIEDS, has always been involved in the energy transition and supports our approach and encourages our way of developing energy sources with and for regional communities. Fully committed to preserving the environment, we develop our projects in concert with all stakeholders and always aim to protect biodiversity to the fullest extent possible. We apply the same rigor to all of our projects and this is why we are currently producing half of all our capacity in the Deux-Sèvres region. With this experience behind us and climate challenges facing us, our ambition is to double our production capacity within 10 years”.

“Urbasolar is delighted with this project in partnership with Séolis PROD. This solar energy plant is the result of combining the skillsets of both groups – Séolis PROD as the local player and Urbasolar as the experts in solar energy. Already a partner in the TIPER 2&4 solar plant project, this project is once again proof of our shared ambition to work to develop sources of renewable energy in our region. With proven expertise in photovoltaic solar technology, the group is committed to developing highly energy-efficient facilities which thereby help in the roll-out of greener sources of energy. We also recognize that our project is an opportunity to help protect biodiversity and we are working meticulously to ensure our facilities integrate well into the landscape and are accompanied by solid environmental measures”.

Arnaud MINE, CEO and Stéphanie ANDRIEU Managing Director of the Urbasolar Group

“Set up in 2016, the partnership between SMITED (Deux-Sèvres Mixed Waste Treatment and Disposal Group) and SÉOLIS aims to construct a solar energy plant on the waste treatment site at La Loge, in the municipality of Coulonges-Thouarsais, of which SMITED is the owner and operator. With this project for the production of clean and renewable electricity, SMITED and the municipality of Coulonges-Thouarsais are demonstrating their clear commitment to the energy transition. The installation of solar panels will also allow SMITED to convert an unusable former waste storage site into a valuable property asset.

The project is controlled by regulation and subject to a local government order. Operation of the forthcoming plant will be under contract between SÉOLIS and Urbasolar (a developer, builder and operator of renewable electricity production facilities based in Montpellier). Work began in the fall of 2021 with the creation of roadways and access points and is to start again in April 2022. Nearly 10,750 solar panels will be brought on-line in December 2022 and, when complete, annual electricity production is set to reach around 5,900 MWh, equivalent to the consumption of about 2,700 people. Already fully committed to protecting the environment with the La Loge waste site’s ISO 14001 certification and the exploitation of more than 93% of the biogas produced by the storage site, SMITED is therefore opening a new page in its history over the next 40 years, the estimated lifespan of the solar panels”.