Solar panels on the site of the former waste facility at Scey-sur-Saône-et-Saint-Albin! 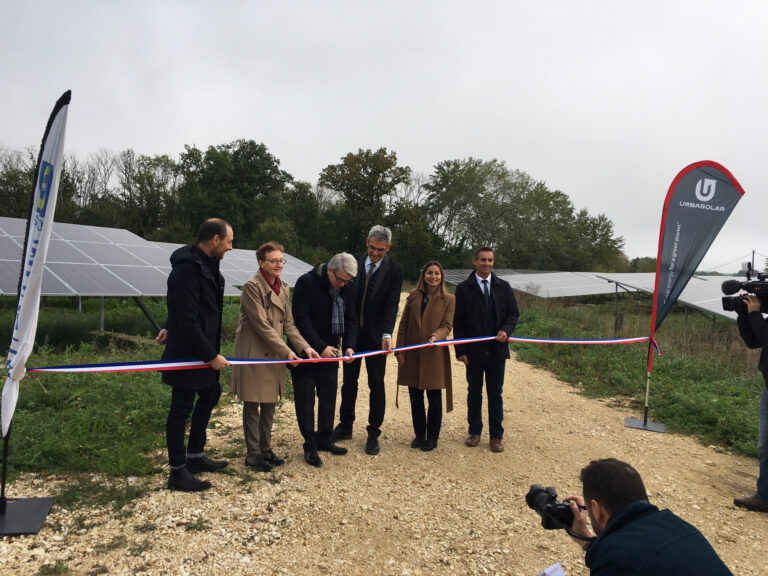 SICTOM in the Val de Saône, SYTEVOM in the Haute-Saône and the renewable energy producer Urbasolar have today inaugurated a solar energy plant located in the municipality of Scey-sur-Saône-et-Saint-Albin, producing 2.8 MW of power. This disused site has been reconverted and given a new lease of life, producing sustainable and low-carbon energy for the local area.

This Friday September 30, Joël Brice, President of SYTEVOM, Eric Masoyé, President of SICTOM Val de Saône, Michel Robquin, Secretary General of the Prefecture of Haute-Saône, members of the Urbasolar team as well as numerous local representatives were in attendance for the inauguration of the solar energy plant at Scey-sur-Saône-et-Saint-Albin.

A waste storage facility reconverted into a solar power plant

Situated over the top of the former Non-Hazardous Waste Storage Facility in the village of “La Corvée du Déchireux”, the site was operated from 1985 to 2002 before undergoing a full reconversion in 2006. In order to satisfy the requirements of the tender process launched by the CRE (Energy Regulation Commission) in terms of the criteria for building on a “degraded site”, SICTOM, which owns the property, wanted to transform it into a source of sustainable energy production, thereby helping towards the region’s targets in terms of the energy transition.

Appointed by SICTOM, SYTEVOM (Mixed Single-Purpose Association for the Transfer, Elimination and Recycling of Household Waste, based in the département of Haute-Saône) chose the solar experts Urbasolar to develop, finance, construct and operate the solar energy plant.

Now, 6,700 solar panels have been installed to produce green energy on the very site of this former waste landfill site covering 5.8 hectares. Commissioned in May 2022, this solar power plant, with an output of 2.8 MWp, will produce 3,000 MWh each year, meeting the electricity needs of more than 1,500 people, or the equivalent of the municipality of Scey-sur-Saône.

Urbasolar pays particular attention to how its projects integrate into their natural surroundings and to maintaining and developing local biodiversity.

In order to respect the biological cycles of local species, work followed an ecology calendar and did not start until the end of the reproductive cycle of the local fauna. The perimeter fence around the plant has also been fitted with openings for “wildlife corridors” to allow the free movement of animals. Wetland areas already present at the edges of the plant have been avoided in order to preserve and develop populations of amphibians and reptiles.  Long-term ecological monitoring will also be carried out on these populations over the entire lifetime of the plant.

Finally, Urbasolar also wanted to install ecological support measures outside the perimeter of the solar plant. This is why an agreement was signed with the associations IMAGIN’RURAL and CPEPESC to plant and maintain a row of hedges which will help maintain local bird populations on farmland situated within the municipality.

The solar energy plant delivered by the Urbasolar group will therefore allow the municipality, SICTOM and SYTEVOM to participate actively in the sustainable development of their region, producing energy from renewable sources through the rehabilitation of a degraded site.