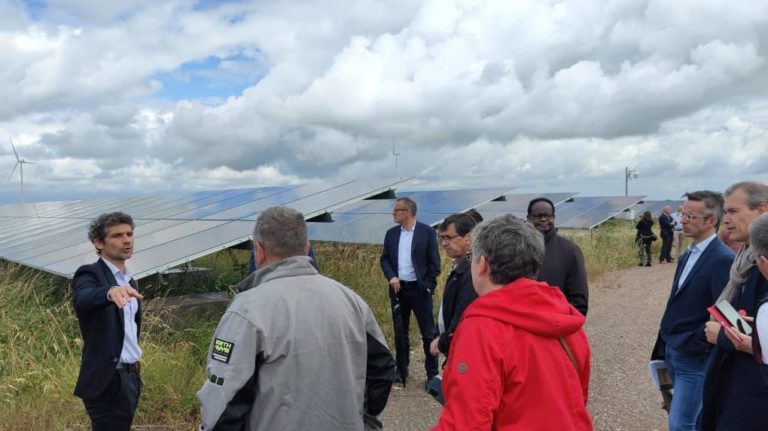 Guests were invited to visit the site of the solar power plants at Saint-Léger-de-Montbrun, with as guide Julien Picart (left), Director of Development for Ground-Mounted Solar Plants at Urbasolar

The Tiper 2 & 4 plants, located on the former Etamat site, provide enough electricity for 2,500 homes, or 40% of the population of Thouars.

The Tiper 2 & 4 solar power plants, installed on the former Etamat site (army equipment depot) at Thouars, were officially inaugurated on Thursday, June 30 last. Supported by Urbasolar and Séolis Prod, they have actually been in operation since May 2021. This ceremony provided the opportunity to remind people of the scale of the project:  €9 million of investment returning

22,000 solar panels spread across 14 hectares, providing an output of 9.5 MWp (megawatt peak, which corresponds to the maximum power output of a unit, find out more). Producing 11,300 MWh annually, these plants help support the electricity needs of 2,500 homes, or 5,500 people, heating excluded (40% of the population of Thouars).

One project can conceal two others Two further power plants, which have received additional commitments from the communities in the Thouars area, are part of the ‘Tepos’ program (‘Territoire à énergie positive’ or ‘Positive Energy Region’) and are to be built by 2050. This proactive commitment was underlined by all of the speakers who, given the current geopolitical context, were delighted to be helping promote the energy transition. “We were absolutely right to get involved in this project”, emphasized Emmanuel Charré, Deputy Leader of the Thouars Town Council, Vice-President of the Regional Authorities Group and a regional consultant. “This moment is highly significant”, said Roland Motard, President of SIEDS (Syndicat d’énergie des Deux-Sèvres), who reminded us of how dynamic the renewables sector in the Thouars area currently is.

The environmentally-friendly approach was also welcomed. Not only due to the fact that this disused site had to be decontaminated after the army closed it. “We had to excavate to a depth of 80 cm and we extracted 16,000 munitions”, said Julien Picart, Director of Development for Ground-Based Solar Plants at Urbasolar. But also because reuse of this site was intended to increase biodiversity. In fact, Urbasolar has announced that the company will monitor animal species present on the site throughout the plant’s operating lifetime, or around 40 years. Furthermore, the grass is mowed as late as possible to encourage the development of both animal and plant life. This new solar energy plant in the Thouars region will most certainly not be the last. Urbasolar and Séolis Prod are already working together to open a solar energy plant on the former La Loge landfill waste site at Coulonges-Thoursais, to include 10,750 solar panels. Pierrefitte also intends to provide a site for a similar plant. In fact, the Sub-Prefect of Bressuire, Catherine Lam Tan Hing-Labussière, has announced that the former SFRM site (munitions disposal site) is to be reused in the same way after decontamination. 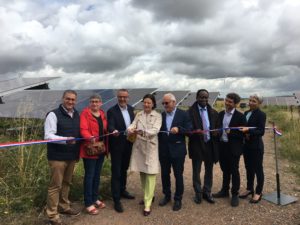