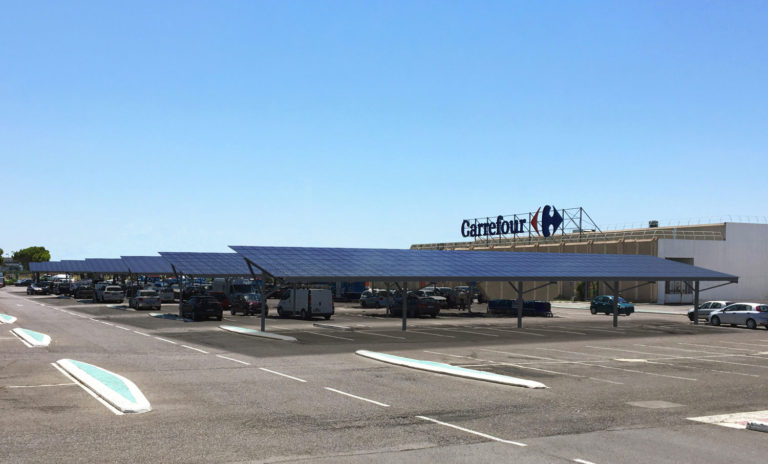 Carrefour has united with Urbasolar, the premier independent operator on the photovoltaic market in France, to accelerate the energy transition of its superstores with an initial installation of photovoltaic parking canopies on the parking lots of 36 of the company’s superstores.

The electricity produced by these installations will be completely self-consumed by each superstore. Carrefour is the first distributer in France to use a self-consumption system of this scale.

To accelerate its energy transition, Carrefour has built a partnership with the independent leader of the photovoltaic market in France, Urbasolar. This industrial actor, specializing in photovoltaics, will work with Carrefour on the installation of photovoltaic parking canopies on the parking lots of 36 superstores in France. This system will, over time, produce a total of 21,000 MWh of green, clean energy to be self-consumed by the stores. That is the equivalent of the annual consumption (excluding heat) of 4,600 households, 210 tons of CO2 avoided each year.

The energy produced through the installation of these photovoltaic canopies will not be put back into the gird as usual but will serve as the production of part of the electricity necessary to the Carrefour superstores. Carrefour is thus a pioneer on a large scale of self-consumption systems, thanks to the expertise of Urbasolar in innovative photovoltaic projects. This initiative will make Carrefour the number one user of a self-consumption system in France and one of the top in Europe. It is part of the goal to diversify energy sources and to look for tomorrow’s solutions for greater energy autonomy for stores.

An installation for users as well

These photovoltaic parking canopies, covering several hundred parking spaces at the superstore, also increase the comfort of customers. They will in effect offer protection from the elements (rain, wind, and sun) to the benefit of the cars parked below by their owners.