Urbasolar  |  news  |  Inauguration of the Toulouse-Oncopole solar energy plant: a major investment in renewable energy on a symbolic site!

Inauguration of the Toulouse-Oncopole solar energy plant: a major investment in renewable energy on a symbolic site! 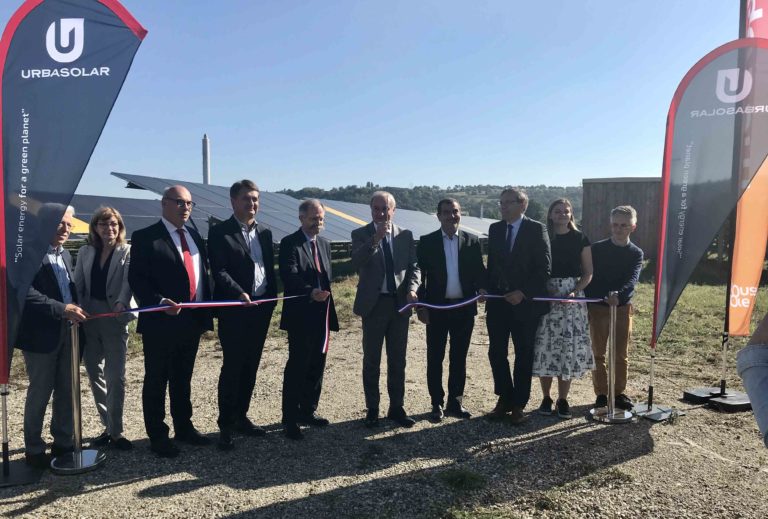 On the day after the 20th anniversary of the tragic events that occurred in the grounds of the former “AZF” factory, the Oncopole solar energy plant symbolizes the site’s rehabilitation and commits the region to an energy transition which is more respectful of the environment.

In operation for a year now, this power plant with an output of 15 MWp and located on 25 hectares of land, produces the equivalent of the power needs of 4,000 homes annually.

A flagship project, this power plant is currently the largest solar energy plant in France located in an urban environment and stands out particularly for its visual attractiveness. Designed as a piece of Land Art and validated by the French Buildings and Architects Association (ABF), it incorporates a pixelated image as seen from the sky using interlaced colored panels placed between the solar modules. This graphics method allows the image to change depending on the viewpoint, when viewed from Blagnac Airport or the future cable car over the Garonne river.

Proof of a real commitment to the environment

Installed on land which is highly polluted, the Oncopole solar energy plant is proof of the commitment of Toulouse Métropole to the use of renewable energy and constitutes an exemplary case of an environmentally-friendly project.

For Jean-Luc Moudenc, “In this place which is highly symbolic for the people of Toulouse, the city is showing its ability to combine its duty to honor the victims and also to invest in the future at this former AZF site. This Oncopole solar energy plant will produce the equivalent of the power consumed by more than 4,000 homes, and constitutes a major investment in renewable energy to help the people of Toulouse improve their local environment. ”

“Furthermore, the nature of this land, which was altered by the catastrophe, required innovative design and installation processes in order to fit harmoniously into the site and turn it into a noteworthy project in environmental terms“, adds Gilles Amendola, Vice-President of Urbasolar.

Another peculiarity of this plant is the €12.4 million investment made primarily by local government bodies (Toulouse Métropole, Toulouse Electricity Authority, Air Climate Energy Agency of the Occitanie Region), as well as by the Urbasolar group. Local citizens also helped finance the plant through the SCIC Citoyen’R organization which acquired a shareholding in the contracting company in charge of the project.

This collaboration has made this solar energy plant into a truly local success story, bringing together a variety of local stakeholders: local government, public authorities, members of civil society, private companies and citizens. It is also an example of people seizing the opportunity to unite in the interests of a successful energy transition, something we have a duty to achieve.

Designed, constructed and operated by Urbasolar, the Oncopole solar energy plant brings together all of the group’s know-how, whether it be technical, environmental, artistic or even financing skills.

This website uses cookies to improve your experience while you navigate through the website. Out of these cookies, the cookies that are categorized as necessary are stored on your browser as they are essential for the working of basic functionalities of the website. We also use third-party cookies that help us analyze and understand how you use this website. These cookies will be stored in your browser only with your consent. You also have the option to opt-out of these cookies. But opting out of some of these cookies may have an effect on your browsing experience.
Necessary Always Enabled
Necessary cookies are absolutely essential for the website to function properly. This category only includes cookies that ensures basic functionalities and security features of the website. These cookies do not store any personal information.
Non-necessary
Any cookies that may not be particularly necessary for the website to function and is used specifically to collect user personal data via analytics, ads, other embedded contents are termed as non-necessary cookies. It is mandatory to procure user consent prior to running these cookies on your website.
SAVE & ACCEPT