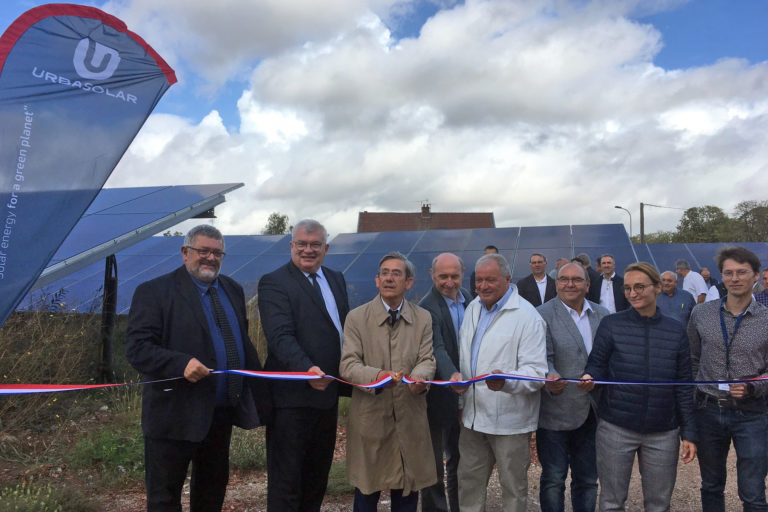 Located on the site of a former slate quarry and the grounds of its associated tile factory, this 26 MW solar power plant has been constructed by the Urbasolar group and inaugurated today. This successfully rehabilitated site is proof of the commitment shown by a group of local businesses deploying sustainable and low-carbon energy in the region.

Rehabilitation as part of the energy transition

Nearly 60,000 solar panels have been installed on the site of this former Edilians terracotta tile factory, shut down in 2009, and the Pièce Adélaïde clay quarry, which operated until 2000. The project, located on a private site belonging to Edilians, has been strongly supported by the Côtes de Champagne & Val de Saulx Regional Communities Group (4CVS) and the municipality of Pargny-sur-Saulx, who saw the opportunity to reuse this piece of industrial wasteland and its disused buildings. After the site had been decontaminated and made safe, and the factory buildings demolished, a solar power plant with an output of 26 MW covering 27 hectares was commissioned there in June 2022.

Developed, constructed and operated by the Urbasolar group, it produces 27,800 MWh of electricity each year, or the equivalent of the annual consumption of 13,500 citizens, which is more than the combined population of the 40 municipalities in the 4CVS!

The project has also seen strong engagement from local citizens (from this département and from neighboring ones) via crowdfunding, raising a record amount of €2.3 million towards the cost of constructing the plant. This is the largest amount ever raised by a crowdfunding project on any platform.

Measures which help protect the environment and biodiversity

Urbasolar pays particular attention to ensuring its solar power plants integrate well into their local environment and preserve the natural ecology of each site.

To achieve this, the group has entered into an ambitious partnership with CENCA (Conservatoire d’Espaces Naturels de Champagne-Ardennes), which will use its recognized expertise in this field to manage and monitor environmental measures aimed at ensuring the project integrates fully into the local ecology.

An area which has not been favorable to biodiversity has been rehabilitated and seven ponds have also been created at different locations across the site. This has been done in order to recreate habitats likely to encourage the development of flora and insects and promote reproduction amongst amphibians and birds.

A row of hedges will also be planted along the north side of the former factory site in order to provide an effective natural corridor which can be used by birds and bats, whilst limiting any direct visibility of the solar plant.

This exemplary project, delivered by the Urbasolar group, is the perfect illustration of how local authorities and citizens alike are willing to work towards achieving energy solutions which are both sustainable and environmentally-friendly.